6:30am. I get woken by a nurse asking me to take my “readings” these consisted of taking recordings of my bloods, blood pressure, heart rate and temperature. And as I’d soon figure out, they happened morning, afternoon and night time to make sure your body was in a ‘fit’ state to receive the treatment.

After coming round from my sleepy state, I was greeted with a “good morning what would you like for breakfast” from the catering staff. I can’t tell you how warming and settling hearing their ‘morning visit’ would become during my stay throughout all of my treatment visits. They’d give you some, have a ‘chit chat’ and make you feel normal. Of course the doctors and nurses did the same, but when they visited it usually had a medical reason behind it.

After breakfast (Weetabix, coffee with a bit of a full English) I got myself out of bed and showered, in the hope I’d appear fresh and as good as I could do for Robin and my parents who I knew would be heading over later that day.

I tried to dress as normal as possible as I felt it was important to try and keep as much ‘normality’ to my appearance for as long as I could. If you’re going through a chemotherapy treatment, I’d recommend you do the same. It certainly helped ‘shorten’ the days that were to come in the near future where I looked ill and not myself.

So fast forward a couple of hours to Robin and my parents arrival and things were going well. Understandably, it was hard for us all to sit in the room and act as if all was OK, but we all tried to keep the conversation as normal and light hearted as possible. This again was important to keeping me and hopefully them in as positive frame of mind as possible.

Lunch time arrived and so did my reaction to chemotherapy. All of a sudden my stomach felt very uncomfortable, I felt very hot and clammy and after a few bathroom visits I thought I was going to pass out. In arrived the nurses who quickly dealt with me, giving me some anti sickness tablets and ‘peppermint water’ within minutes I was feeling fine again. Thankfully, as it would turn out, this was the only real reaction / side effect I’d have during my course of treatment and from then on I didn’t get any sickness. Again if you’re reading this and worried about sickness, please don’t be. The treatment will effect everyone differently and with the amazing anti sickness drugs you’ll be given during treatment, the days of throwing up by a toilet are few and far between.

Without dwelling on too many details for the remaining 4 days of treatment I want to mention a couple more things about my first week.

Where is the lump?

Yes, that’s right. 3 days in to my treatment I looked at my neck in the morning and I couldn’t see the lump. After a lot of feeling and checking in the mirror and running it by Robin and my parents we all agreed, it had ‘gone’.

Amazing. “I bet I won’t need the full 23 days of treatment” I said naively to my family. I guess that’s what they call wishful thinking?

My thinking was, if it had worked that fast in 3 days, I may not need all of the cycles. Wrong! 🙂

A registrar ( a member of the medical team who works directly with my consultant) visited me later that morning and I showed them the lump had gone. He didn’t quite seem as excited as I was. In fact, although it was good news, the lump had shrank so it was no longer visible on my neck, it was shrinking / breaking up that quickly that my blood test from earlier that morning showed some ‘toxic’ traces from the tumour. Basically, if a tumour breaks up too quickly you can get ‘Tumour Lysis”. This is where large amounts of the tumour cells are killed off and release their contents in to the bloodstream.

So good news and not so good news! The tumour was on the retreat but it was potentially poisoning me. No problem. The registrar and team of nurses quickly had me put under observation and had me hooked up to the drip to have fluids 24 hours. A slight inconvenience being ‘wired’ up to the machine all day and night but if it was ‘flushing’ out the bad guys then it was a welcomed inconvenience.

On Thursday evening I got a surprise visit from one of my closest friends. Originally my manager at the start of my career, now a friend for over 14 years. It was such a welcome sight. It was nice for both Robin and I to have someone ‘new’ to talk to about things and not just about what we were going through. He even brought me a car magazine to read as well as the staple food of all hospital patients, a bunch of grapes!

Friday night and Saturday arrived, emotionally these were the hardest days for me. Life went on, seeing Facebook check-ins and photos of friends out enjoying their weekend whilst I was having chemotherapy was hard for me to see. only because only a couple of months previous, that was me and Robin with our friends. Robin reminded me that as soon as this treatment was over, that would be us again, all I had to do was get better and be patient.

To wrap up week one of treatment I’d say the hardest part for me wasn’t the treatment as the majority of the side effects were still to kick in instead it was emotional side of things. Seeing my family have to watch me go through the treatment and them feeling they weren’t helping. Little did they know, by them just being there they were helping tremendously. The support of my wife, parents, sister and friends near and far all pulling together to make me feel loved and supported. I’ve said it before and I will say it again. Thank you to all of you who helped me through my first week.

Oh, and before I forget. One really important piece of advice. You need to take your own / shower towels with you to a hospital when you’re an inpatient. There was me thinking I was staying on an ‘All inclusive’ basis!! 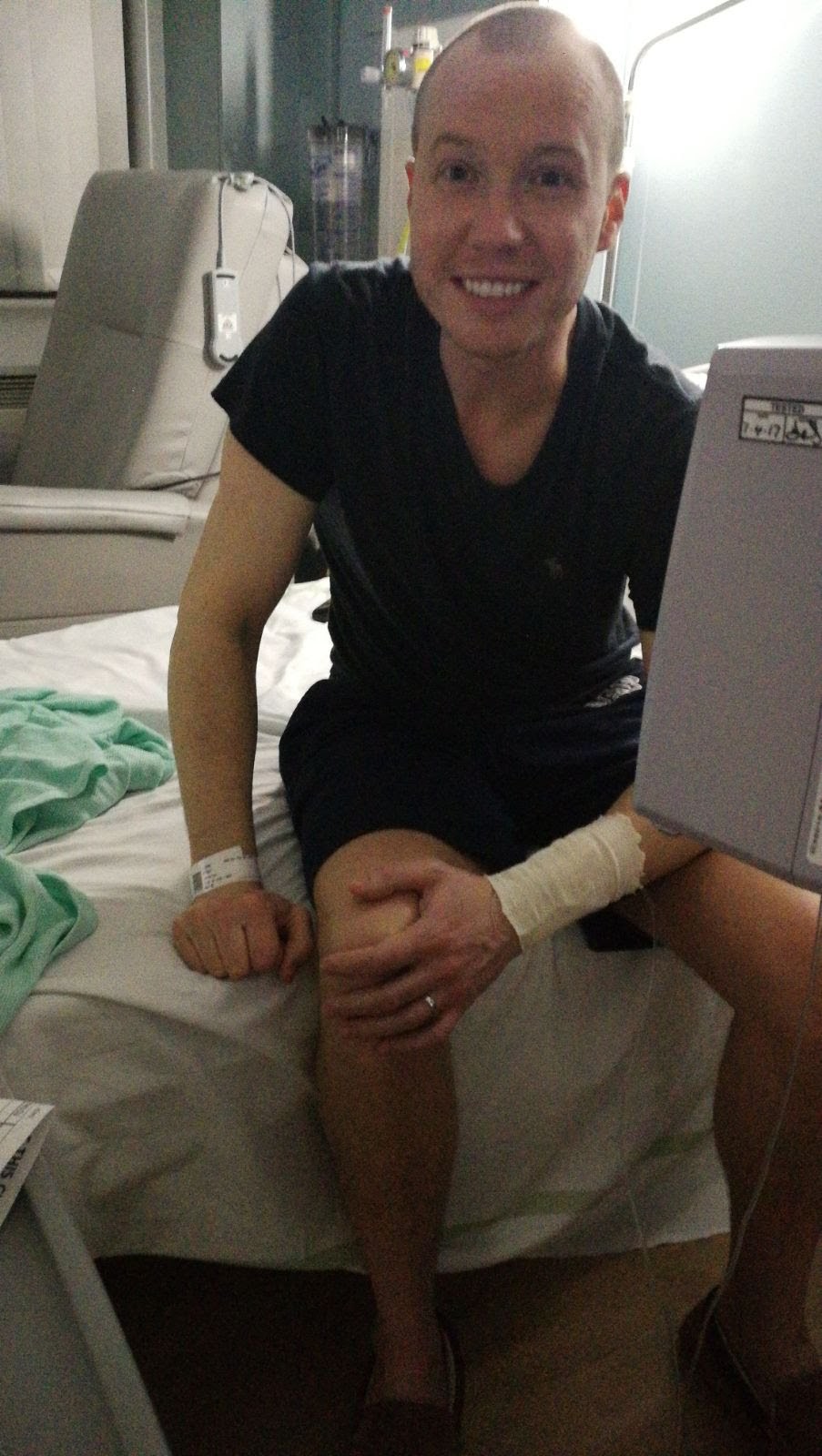 This is a picture my wife Robin took of me on the 2nd or 3rd night of treatment.

View all posts by brookjamesbrook